No matter how many cats you have, an odor-free home starts with Arm & Hammer—the odor elimination expert! Arm & Hammer Litter Double Duty Clumping Litter is a lightly scented litter infused with odor-eliminating baking soda and is also 99% dust-free to reduce tracking! This advanced odor control formula works to eliminate even the most stubborn litter box odors on contact. Best of all, not only will your house stay smelling so fresh and so clean, but the strong clumping formula makes clean-up especially easy after each use. Upgrade your kitty’s litter and kick foul odors to the curb with this Arm & Hammer cat litter, he deserves it!

Always wash your hands thoroughly after handling used cat litter, as cat feces may contain Toxoplasma gondii—a parasite that can cause toxoplasmosis. Pregnant or nursing women, as well as children and anyone with a weakened immune system, should avoid handling used cat litter. Always handle litter in a ventilated area to avoid inhalation. Keep contents and packaging out of reach of children and pets. Seek medical help in case of accidental ingestion.

To transition you cat to use Arm & Hammer Litter: * Fill a clean litter box ¾ full of Arm & Hammer Litter. Next, pour one to two inches of your old litter brand on top. Don't mix! Your cat will do this naturally as she uses her litter. * Allow your cat to use the mixed litter until the next time you change the box. * Your cat should be acclimated to Arm & Hammer after just one use, but some cats can need a little more time.

Where should the product be stored?

Store in a dry place if clumping cat litter comes in contact with water, clumps will form. But it will not be affected by humidity.

Can I use this in animal cages or in litter boxes for pets other than cats?

No, it is not recommended.

No. The litter box is a dirty place. Each time your cat uses the litter box, feces and urine introduce odor-causing bacteria. Although the product is not antibacterial, ARM & HAMMER™ Cat Litter utilizes genuine ARM & HAMMER™ Baking Soda to eliminate odors caused by bacteria.

Is the carton recyclable?

Yes, The package is made from 100% recycled materials with 35% from post consumer sources. It is recyclable in areas that accept this type of carton. Please check with your local recycling center for details.

Does the product contain animal by-products?

ARM & HAMMER™ Cat Litter Deodorizer is designed to eliminate litter box odors that ordinary scoopable and clay litters can't. The powder formula also prevents the litter from sticking to the bottom of the box, making litter box clean up even easier.

As the package indicates, all ARM & HAMMER™ Cat Litters are 99% dust-free.

As with any litter, it is possible some particles may scatter outside the box when the cat uses or leaves the box. However, unlike traditional clay litters, clumping litter should not get muddy in the litter box so your cat will not leave muddy footprints or tracks outside the litter box.

Toxoplasmosis is a condition caused by a parasite sometimes found in cat feces. Wash your hands thoroughly after handling used cat litter. Pregnant women and those with suppressed immune systems should be especially careful to always do so. Unused ARM & HAMMER™ Cat Litter in its original package does not contain these parasites.

What is the pH of ARM & HAMMER™ Cat Litter?

Is ARM & HAMMER™ Cat Litter safe for pets including kittens?

We are extremely confident of the safety of ARM & HAMMER™ Cat Litter, when used as directed. During its development, ARM & HAMMER™ clumping Cat Litter was evaluated by numerous consumers (and their cats) with no adverse effects. Additionally the safety of baking soda is well known and documented.

Feline Urinary Syndrome (FUS) is a common condition that especially affects male cats. Although there are many theories on what causes or contributes to FUS, there is no indication that clumping (or traditional clay) cat litter causes FUS in cats or kittens.

What is the source of ARM & HAMMER™ Cat Litter ingredients?

The main ingredients in ARM & HAMMER™ Cat Litter are derived from mineral and plant sources.

Does ARM & HAMMER™ Cat Litter expire after a period of time? What is the shelf life?

ARM & HAMMER™ Cat Litter does not lose its effectiveness over time.

How long does a box or bag of ARM & HAMMER™ Cat Litter last?

The amount used varies depending on the frequency of litter box usage as well as the number of cats in your household.

How often should I change the Cat Litter in the litter box?

What if my cat eats the litter?

It is not normal for a cat to eat cat litter and it may be a sign of illness. Your veterinarian should be contacted immediately. (Please be assured that should a small amount be ingested during normal grooming, your cat's intestinal tract should naturally move the material through the cat's system.)

What if my dog eats the litter?

Although dogs sometimes eat cat litter and other foreign objects, you should remove the litter box from your dog's reach and contact your veterinarian immediately. Ingestion of litter and foreign objects may indicate illness.

What is Clumping Litter or Scoopable Litter? How does it differ from traditional Clay Litters?

Clumping or scoopable litters utilize the "clumping" properties of sodium bentonite, a naturally derived special type of clay, to control litter box odors. This special type of clay uses the moisture it absorbs to bond soiled litter particles into clumps for easy removal and disposal. Litter boxes using clumping litters can be cleaned by removing only the soiled litter and sprinkling a new layer of clumping litter in the box. The box is fresh for use without the unpleasant task of emptying, washing and drying! Ordinary clay litters can absorb moisture, but cannot isolate it for easy removal. Since soiled litter is a source of odor-causing bacteria, clay litter must be completely changed frequently to prevent odor build-up. This involves discarding the entire contents of the litter box, washing and drying the box, and replacing the litter-a messy and smelly task... Cats love a clean litter box and nothing is cleaner than fresh clumping litter. Cats think clumping litter is the best thing since catnip...we think you'll agree!

Can ARM & HAMMER™ Cat Litter be used for traction during icy conditions?

No. ARM & HAMMER™ Cat Litter, as well as other clumpable or scoopable litters, should not be utilized for ice traction.

ARM & HAMMER™ Double Duty is the only clumping litter with a formula that combines moisture activated ARM & HAMMER™ Baking Soda crystals with urine and feces odor neutralizers to destroy both overpowering odors on contact.

What are the ingredients in ARM & HAMMER™ Double Duty Clumping Litter?

ARM & HAMMER™ Double Duty contains clay for absorbency, clumping and deodorization. It also contains powerful compacted ARM & HAMMER™ Baking Soda crystals for deodorization, as well as a fresh scent fragrance that is activated when it comes in contact with moisture.

ARM & HAMMER™ Double Duty has a fresh scent that refreshes every time your cat uses the litter box.

How should I dispose of the litter? 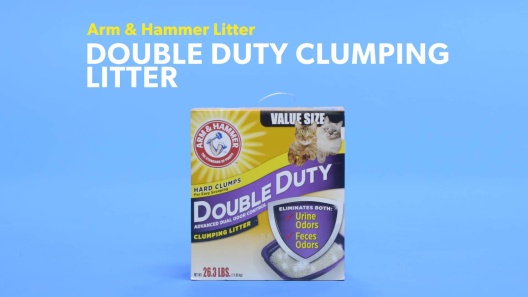 Learn More About Arm & Hammer Litter From Our Team of Experts

How long does the 40 lb box of itter last for 1 cat?
Answer by • Nov 03, 2017
The litter used will vary by the individual cat.
Is this litter dust free?
Answer by • May 14, 2018
This litter is 99% dust-free.
Does the scent have any lillium extract (Lily flowers)? Better yet does this product have any Lily extract at all what so ever?
Answer by • Feb 03, 2018
Arm & Hammer does not knowingly include flower or lily extract in their formulation. However, they cannot verify whether it may be present below reportable limits in the proprietary materials they obtain from their suppliers.
Does this track?
Answer by • Apr 08, 2018
The litter creates rock-solid clumps for easy removal and reduced tracking.

This is my first time using this arm & hammer litter, have used the others in the past. So far this litter is a bit more dusty but no where close to tidy cat. This clumps pretty well and the smell is fresh. My cats do not mind the scented however I do. This has a mild fresh scent which is not overpowering at all. Does really well for my two male bengals.

My usual litter was out of stock so I needed to try something else. This looked good, and the price was right. I've only used this one for a few days but it seems to be working fine in keeping the odor down. Or maybe I cannot smell the odor because of the litter scent, which for me is pretty strong. The litter box is heavy, too. It's not one of the light weight litters. But it works, so it's fine.

Arm & Hammer has always been a reliable company.There’re products never let you down. Let’s face it.. cat litter is pretty much all the same. The only thing everyone wants is odor control. This one does the job.

My favorite brand, but bad shipment

At least one of my litter boxes i got out of 3 was a bad mix. It didnt clump, at all. I had to waste most of it. Prior shipments ive gotten were perfectly fine, so im chalking it up to just a bad mixture in the specific lot that i got in that one box. I thought I'd give a review to make sure someone knew about it.

It's okay in a pinch

We used this litter for a little while, but then I started to notice that it does not clump around the urine very well. When I would go to scoop if I shook my scooper in the slightest, the whole clump would disintegrate. Also, I noticed when I refill the litter boxes that this litter is very dusty and would often make me, and sometimes my cat, sneeze.

tried this product for the first time. it clumps so big it uses up all the litter. the oder stopping is quite adequate. Would use again if didn't clump so large. sorry!

Doesn’t clump well AT ALL- if you shake the scooper at all the clumps fall apart. Controls odor well but I won’t buy again due to the clumping issue.

Great product and cheaper delivered than in the stores when combined with dog food and auto shipped. Always right on time and easy website to use. Thanks, Chewy!

Litter that makes a difference

I use arm & hammer litter because i have 2 cats that can really stink up a room with thrir litter box and arm & hammer keeps ordors down.

I've used this litter for quite awhile, and for the most part it has always been pretty good in terms of clumping and odor control. Although now I've finally decided to switch because I cannot handle the massive clouds of dust it emits from hardly being touched. It's always been pretty dusty but it seems like it's gotten worse. I cleaned the litter box in the back of my bedroom (normally a covered box) and it produced so much dust that I actually could not go into the room for over an hour, it just wasn't tolerable. There is absolutely no way this litter is 99% dust free, that's now become the deal breaker for me