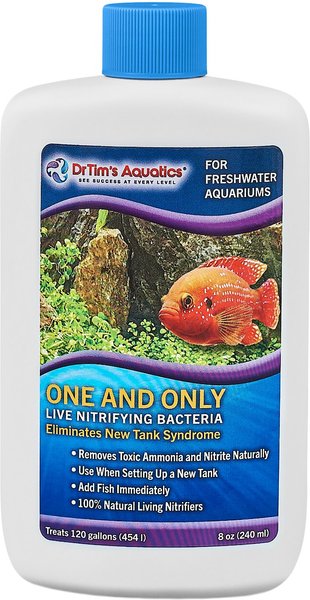 Size
$30.22Chewy Price
List:
Tooltip Available
List Price is the suggested retail price from a manufacturer, supplier, or other retailer. It may not necessarily reflect an actual price offered on our site or elsewhere.
$49.79Chewy Price
Save
$19.57
(39%)
$28.71Autoship Price
Autoship (Save an extra 5%)
Choose Autoship at checkout for regular deliveries. 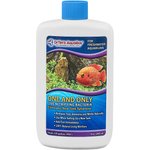 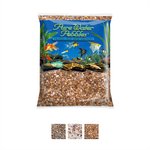 Dr. Tim's Aquatics One & Only Live Nitrifying Bacteria for Freshwater Aquariums removes toxic ammonia and nitrite, instantly working to prevent new tank syndrome by establishing a biological filter in your newly set up aquarium. Use One & Only when setting up a new tank, after a disease treatment, or during water changes. This powerful solution contains no sulfur or other offensive odors.

HAZARDS TO HUMANS: Keep out of reach of children.

Shake well before using. Best to use the entire contents at one time. Minimum dose 10mL (2 capfuls) per 10 gal. Cannot be overdosed. Turn-off UV and remove filter socks for 48 hours. Keep refrigerated for longest shelf life. Do not freeze. Use when setting up a new aquarium, after water changes and disease treatment to quickly establish a natural biological filter.

What will One & Only do for me?

One & Only is designed for one job – to quickly establish a biofilter in your newly set-up aquarium so that your fish do not experience New Tank Syndrome (NTS), which is when the water contains such high levels of ammonia and/or nitrite that your fish die. One & Only does this by containing species of ammonia- and nitrite-oxidizing bacteria that prefer to live in the fish tank environment.

How should One & Only be added to the aquarium?

When should One & Only be added?

One & Only should be added after the tank has been set up. At this point the water should have reached the proper temperature and have been dechlorinated. Start the filter and make sure it is functioning and then add One & Only. Fish should be added within 24 hours of adding One & Only nitrifying bacteria. An alternative to adding fish is to add some ammonia to the water.

How many fish can I add to the aquarium after dosing with One & Only?

This is the hardest question to answer because every situation is different. One & Only will dramatically reduce the time it takes to establish a biofilter in your newly set-up aquarium. However, even One & Only has limits.For instance, if you set up a saltwater tank and use uncured live rock, One & Only may not be able to initially control the ammonia concentration in the water because there will be too much decay of organic matter from the uncured live rock.Or if you let every friend of your kids feed the new fish tank such that you are grossly overfeeding the tank, One & Only will not be able to maintain low levels of ammonia and nitrite.Also, some fish species are very sensitive to any amount of ammonia in the water so these fish should be added to the tank in the first 20 or so days after set-up.In general, you can add one giant danio-sized fish per gallon when initially dosing with One & Only. Feed normally and monitor ammonia and nitrite levels in the water. You might see a little ammonia or nitrite for a day or so but this will quickly disappear. You can then add more fish to the aquarium.

Does One & Only ALWAYS have to be refrigerated?

How should One & Only be treated in relation to temperature?

The best way to handle One & Only is to treat it the same way you would treat your fish. You wouldn’t keep the bag of fish you just bought at the fish store in direct sunlight in your car for hours while you continued shopping nor would you let that bag of fish freeze — the same goes for One & Only. Keep One & Only in moderate temperatures and it will be perfectly fine when you are ready to use it.

What about the longer term storage of One & Only?

At a temperature of about 50°F, One & Only will be viable for one year. Each bottle is stamped on the back with the words “best used by” and then a month and year.

When should I use One & Only?

Use One & Only when setting up a new tank and after major environmental changes to your aquarium. Examples of major changes include a disease treatment with antibiotics or chemicals that are harmful to the nitrifying bacteria, after a major gravel cleaning which can disturb the bacteria on the gravel and after a failure of the filter.

I have a Brackish water tank – which bacteria is for me?

The choice of whether to use the Freshwater One & Only or the Saltwater One & Only bacteria in a brackish water tank depends upon the salinity (or specific gravity [S.G.]) of your water.If your salinity is less than 10 ppt (1.007 S.G.) then use the freshwater formula.If your salinity is greater than 10 ppt (1.007 S.G.) then use the saltwater formula.

can I use Dr. Tim's one and only freshwater for water changes?
Answer by • Jan 17, 2019
This live nitrifying bacteria is designed to be used during water changes, when setting up a new tank, or after a disease treatment.
is their copper in this
Answer by • Sep 12, 2018
This product does not contain copper. This treatment contains 100% Live Nitrifying Bacteria for aquaria.
how do you know if the bacteria is dead
Answer by • Mar 09, 2021
This product contains live species of ammonia- and nitrite-oxidizing bacteria that prefer to live in the fish tank environment.

I paired this with their bottle of ammonia and followed directions specifically. I've done fishless cycles before and never had this much of a problem while spending this much extra money.

So I dont leave many reviews for products I've bought. Let me tell you, my 60 gallon new aquarium was milky white. Every aquatic enthusiast said to wait and do nothing. So after losing a favorite Oranda, I had to try something. Dr. Tims to the rescue. In 48 hours, it completely cleared, ammonia is 0. Fish are happy and active. Ive added pic to prove it wirks!

No Effect on Tank

Unfortunately there was no change in water parameters after using this product. I doubled the amount needed, using the entire 120mL on a 55 gallon tank. Ammonia did not budge from prior test after a full 24 hours. Still no signs of nitrite or nitrate. It was cooler when this shipped too so I was hoping heat wouldn't impact the effectiveness.

Not sold on this

First time using this. I use to use Stability and had better results. Although many swear by this i will not.

Didn't work at all

All the fish ppl said this was sooo much better. I poured the whole bottle, that should treat 60 gallons, into a 10 gallon tank and nothing happened for 9 days. I put the 40 drops of ammonia(4 drops per gallon as instructed) and it brought the ammonia up to 4ppm for all 9 days, No nitrites and no nitrates. I ended up draining the tank and starting over with Fluval, which I know works in 3 days. That was last night and I already have nitrates with Fluval.

I tried doing the fast track tank cycle following instructions to the T and the ammonia is the only thing that worked. I poured the entire bottle in my 40 gallon tank and in the filter. I can’t get the ammonia back down and it’s still showing 0 nitrites with PH of 7.6 after almost 2 weeks. I haven’t been able to even add the extra dose of ammonia in to help kick off the bacteria so I ended up doing a water change and adding other beneficial bacteria & now my tank of finally starting to cycle. I’m so bummed after all the good reviews that it didn’t work with paying all of this money for “the best bacteria” and regular bacteria that’s much cheaper is what’s working

My 60 Gallon aquarium wasn’t cycling fast enough so I decided to add this and the ammonia at the same time my ammonia spiked the next day then right after the nitrite spiked now nitrate is spiking so basically I had tried to cycle normally with rotting food and other thing but it still was 1 month later and nothing had really spiked so if you want to cycle a tank in like 2 weeks use this stuff.

Expired over a year

Ordered from chewy. Best by date is nov 2019. It is dec 2020. Not sure if it’s effective. According to dr Tim the bacteria lives up to a year.

LOVE this product! It is hard to find in the big bottles (I have a 90 gallon tank and the large bottle is what I use). I used it when setting up my new tank 2 years ago, and I use it now to help keep my cycle from crashing when I clean my canister filter. I cannot recommend this highly enough. Just make sure you shake it up really well before using. Chewy has the best price, hands down!

Ordered in September 2020. Best by date is February 2020. Not very good quality control by Chewy. Usually this is a good product.