A Street Cat Named Bob: & How He Saved My Life - Chewy.com

A Street Cat Named Bob: & How He Saved My Life 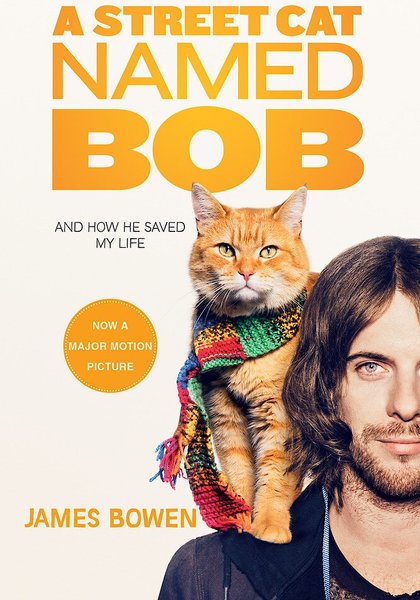 Must enter code at checkout to redeem
Tooltip Available
Free eGift Card added at Checkout with qualifying purchase. Gift card will be delivered via email to the email address linked to customer's account after the order has shipped. Customer must be logged into account to view all applicable promotions. Must add $100.00 worth of eligible items and enter code WINTER at checkout to receive $30 eGift card. Excludes Cat Chow, Embark, Fancy Feast, Friskies, Hill's Prescription Diet, Nutramax, Oravet, PetAg, Puppy Chow, Purina Bella, Purina Beneful, Purina Beyond, Purina ONE, Purina Pro Plan, Tidy Cats, Tomlyn, Whisker Lickin's, Vetoquinol, Wisdom Panel, 9Lives, Veterinary Diet items, Prescription items, and other select products. Subject to Chewy Gift Card Terms and Conditions found here: https://chewy.com/app/content/gift-cards-terms. Gift Cards cannot be returned, refunded or redeemed for cash except as required by law. Limit 1 gift card per order, limit 3 orders per customer. This offer is non-transferable and may not be combined with any other offers. Valid from 1/30/23 12:00AM EST until 2/6/2023 7:00 AM EST, while supplies last. Information subject to change without notice. Additional terms and conditions may apply.
$8.69Chewy Price
List:
Tooltip Available
List Price is the suggested retail price from a manufacturer, supplier, or other retailer. It may not necessarily reflect an actual price offered on our site or elsewhere.
$15.99Chewy Price
Save
$7.30
(46%)
In Stock
FREE 1-3 day shipping over $49

A Street Cat Named Bob tells the true story of street musician James Bowen who had no idea how much his life was about to change after finding an injured cat curled up in the hallway of his apartment building. James was living hand-to-mouth on the streets of London, barely making enough money to feed himself, and the last thing he needed was a pet. Yet James couldn't resist helping the strikingly intelligent but very sick animal, whom he named Bob. He slowly nursed Bob back to health and then sent the cat on his way, imagining that he would never see him again. But Bob had other ideas. This best-selling book teaches us about the transformative power of love between man and animal, and is guaranteed to win over countless readers.

James Bowen is a former “busker” or street performer living in north London, and the author of the best-selling book A Street Cat Named Bob and A Gift From Bob. James found Bob in 2007 and after nursing his injured leg back to health, the pair have been inseparable ever since—even riding the bus together, where they always try to get a window seat.

Be the first to ask a question.

Filter by reviews that mention
Rated 5 out of 5 stars
By Elizabeth on Dec 3, 2022

Once again, my great niece learned so much from Bob about compassion and empathy, how could I not return to him for more lessons?

I am a cat owner myself, I had adopted my cat. Our story is very similar to Bob and James. My cat is a black and white tuxedo and she was attacked by a bigger animal and she's a survivor. So I can basically relate to the book and it's a great read. Right now I'm halfway through the book and I am truly enjoying it.

A Great Cat Lovers Book About A Real Cat!

My husband and I saw the movie. We fell in love with Bob. Since books are always better than the movie and give you more details, I looked the book up on Chewy. I loved the book so much that I bought it for my mom and she ended up talking her book club ladies into reading it also. It's been a hit to everyone that I've recommended it to!

Great story. A very heartwarming story of redemption and friendship. I would recommend this series.

Great read about a great cat and his human.

Wonderful, well written book about an amazing cat and his person. Looking forward to reading the other books. A testament to the possibilities in life.

This book is a good read

I'd heard bits and pieces about this story and wanted to know the rest. Only half way through, but I'm enjoying the simplicity and honesty the author brings in the telling of two lives. It's a remarkable story.

Okay, I'm a softy for rescue stories. This is so well written though, about how Bob helped his chosen human. of course, that's usually the way with out fur-friends; who rescued who. Still, I think you love this story and will want to get the sequels to the Bob story.

How is it that I just heard about this book??? An easy and truly uplifting, heartwarming read. I literally laughed out loud (in public) and even cried a bit several times. I read this book in two days, immediately ordered two other books about Bob and searched out every youtube video about Bob, the author and the movie. One of the BEST cat books I have ever read.